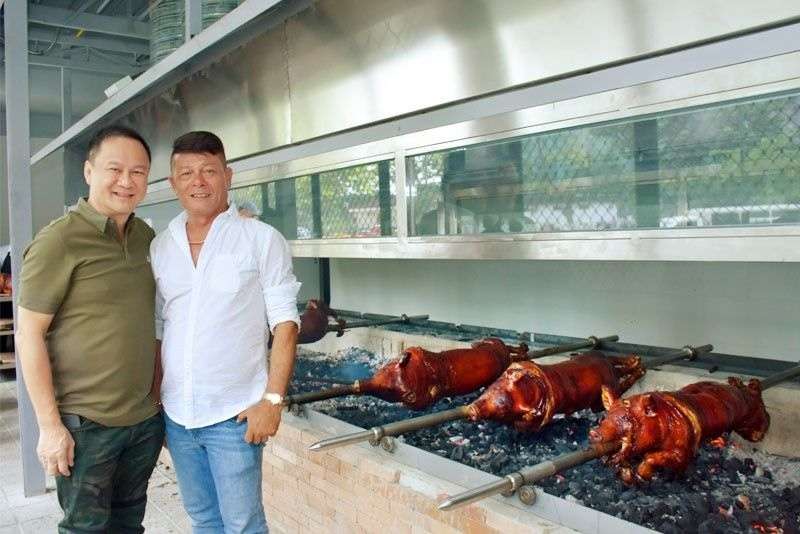 ‘The smell of lechon roasting on the pit was enough to wake me up from deep slumber. And as far as I could remember, I would consume 1/4 lechon for lunch almost every day. Lechon was my late mom’s favorite, too, ’ says Rico’s Lechon owner George Pua. ‘I’ve tried all the popular lechon brands, and Rico’s stood out as the best.’

Recognized as the “Best Lechon” in Cebu by SunStar Cebu for three consecutive years now, and awarded at the Asia-Pacific Stevie International Business Awards in Tokyo, Japan, last year, Rico’s Lechon is set to take Manila by storm with its Cebu-style lechon stuffed with herbs and spices; and the spicy-lechon variant, which is loaded with chili and garlic for that extra kick.

There’s no need for lechon (liver) sauce, but the resto’s Sukang Lami can further enhance its flavor. Suka Lami is available for only P140/bottle at Rico’s Lechon.

With the opening of Rico’s Lechon, one need not fly to Cebu to get his/her fill of the real thing. Thank goodness for Meat Concepts Corp. president George Pua, the man who brought the popular chain to Manila and now owns it.

On July 29, 12 pigs were roasted for “Daghang Salamat,” an event that paid tribute to its Cebu roots. George invited all Cebuanos residing in Metro Manila to post photos of themselves dining at Rico’s Lechon. The chosen winners were treated to a free Rico’s Lechon buffet.

“The line was long but orderly. Over freshly roasted lechon, the winners shared their fond memories of dining at Rico’s and how they missed the lechon, which they partook of with family and friends during their growing-up years in Cebu,” George related. “They just couldn’t believe that Rico’s Lechon is finally here in Manila.”

The following day, George hosted a VIP Night for suppliers, clients and friends, which was also a success.

“The invitation was at 6 p.m. but by 6:20 p.m., all seats were already taken,” George said with a hearty laugh. “The guests came in early fearing that if they came in late, the lechon might run out.”

Aside from lechon, one of the bestsellers was the chicharon bulaklak with Sukang Lami on the side.

“The guests consumed 40 kilos of chicharon bulaklak during the VIP night,” added George. “If this is already an indication, I could sleep well tonight knowing that come opening day tomorrow the restaurant would be filled to the rafters.”

“I’m a fan of lechon! It’s my favorite dish ever,” enthused George during an exclusive interview at Rico’s Lechon, The Fort Strip, a week before its formal opening. “And I’ve been a patron of Rico’s Lechon for years! And I personally believe that it’s the best.”

In fact, George’s love affair with lechon started when he was only 13 years old.

“We used to live in Baclaran. And right in front of our house were restaurants specializing in lechon,” related George. “The smell of lechon roasting on the pit was enough to wake me up from deep slumber. And as far as I could remember, I would consume 1/4 lechon for lunch almost every day. Lechon was my late mom’s favorite, too!”

And eating lechon up to this day is still one of George’s guilty pleasures.

“I’d refer to it as my collagen fix,” he said with an impish grin. “In fact, I recently went on a five-day lechon food trip in the Queen City of the South. I’ve tried all the popular lechon brands, and Rico stood out as the best.”

The dealmaker? Rico’s Lechon has the spicy variant.

“I love spicy food and Rico’s Lechon was the first to offer that,” added George.

And it was on that food trip where the amiable restaurateur met Rico Dionson, the creator of the iconic brand.

“In 2013, he was introduced to me by a good friend. Rico and I didn’t hit it off — on the negotiating table — right away. At that time, he wasn’t ready to offer the franchise,” said George.

Well, that didn’t dampen the passionate restaurateur’s spirit. In 2015, Rico and George met again through a mutual friend and that was when things took shape.

“Through our close friend, Rico got to know me better — as a well-respected restaurateur and lechon lover. He now knows where I’m coming from — that I’m not only interested in acquiring the brand just for profit, but because lechon is really something I love,” said George.

Soon, George and Rico became friends. But it was only in 2017 when Rico decided not just to give George the franchise to bring Rico’s to Manila, but also to sell 100 percent of his shares in the brand.

“Rico wanted the brand to propagate. And with the brewing controversy about Rico’s Lechon in Cebu, he couldn’t expand the business anymore,” explained George.

And so Rico decided it was the right time to entrust his 21-year legacy to George, someone he believes would love the brand and could help it grow.

But before signing the contract, George talked to his feng shui master based in Taiwan to do a quick “reading” of Rico.

“I asked Rico if it was okay with him and he agreed. So they met. And the first thing that my feng shui master told me was that Rico is a good and honest man. The only problem was he talks too much. Kaya marami s’ya nasasagasaan na tao. Well, I could deal with that,” George said.

Needless to say, the contract was signed and now George is all too happy to add Rico’s Lechon to his roster of restaurants.

“All I ever dreamt of was to have my own lechon restaurant to satisfy my cravings any time I wanted. Who would have thought that I would soon own Rico’s Lechon, the best lechon in the land?” enthused George.

What’s on the menu?

George hired Rico’s Lechon staff — from the lechoneros to the choppers! And they’re actually the ones running the show at its Manila branch.

“They’re part of the brand’s legacy. Without them, Rico’s Lechon would be nothing. I also believe that every person you hire, you’re feeding four mouths. As they say, charity begins at home. For me, this is home. And these people are family,” enthused George.

The restaurant also boasts its own roasting pit, which can accommodate 10 pigs, so diners are assured that what they’re getting is fresh.

Setting up the indoor roasting pit posed a lot of challenges.

“I didn’t know that it would be so complicated. Rico’s Lechon in Cebu is roasted in open air. And we were told that air circulation plays an important role in the texture and flavor of the meat. So we even sent our mechanical engineers to Cebu just to observe/study how to replicate that in an indoor setting,” shared George.

Rico’s Lechon uses native pigs, which is more expensive than the commercial ones.

“Native pigs have thicker skin, which when roasted gives it that crunch. It’s also more tender. The skin of commercial pigs is so thin, it cracks upon roasting,” explained George.

Aside from lechon, the menu includes other Pinoy favorites such as seafood kare-kare, lechon sisig, lechon sinigang, Pusit na Pinaputok, monggo, and the Fried Rice Trio, which is George’s own recipe.

“It contains three kinds of dried fish: danggit, tuyo and tinapa. It’s so good you can eat it on its own. But please, do order the lechon,” George added.

Those who want to order one whole lechon should place their orders in advance because the lechon would still be coming from Cebu.

“That’s because our commissary is still in Cebu. We’ll have one in Manila soon. And to accommodate all lechon lovers, each customer is allowed to order two kilos of lechon for takeout,” advised George.

While doing the interview, a 27-kilo pig was roasting in the pit. George invited us over dinner so we could try the legendary Rico’s Lechon. I’ve tried Rico’s Lechon during my frequent trips to Cebu, but not fresh off the pit. So we obliged and waited for what seemed like an eternity.

When the golden babe was finally brought to the dining area, everyone rose from their seats to partake of what is touted as “Da best gyud” lechon in the land!

Rico’s Lechon is SOLD OUT!