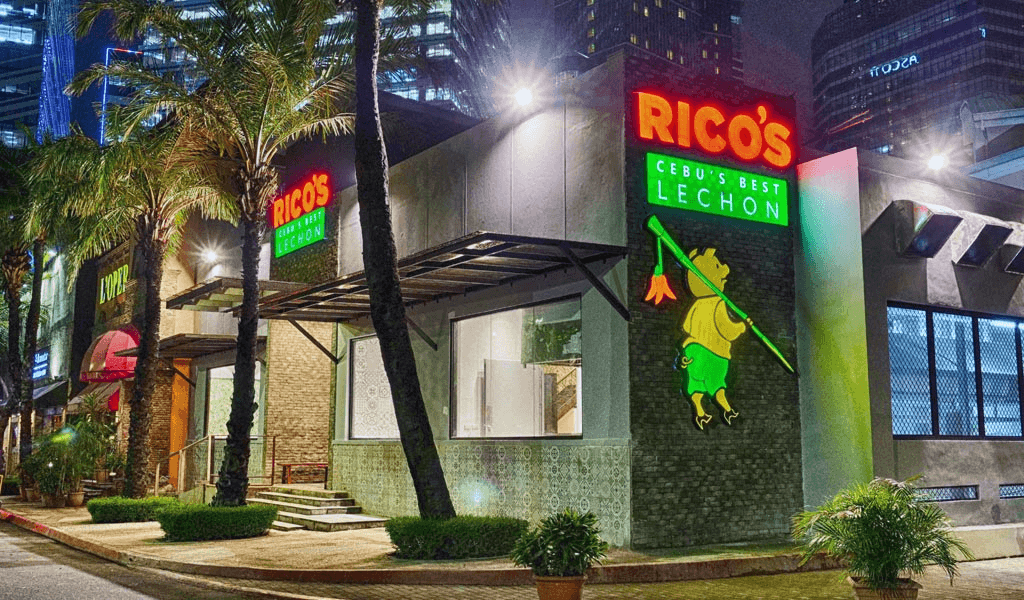 WE’RE GOING to be the bearer of good news for your stomach and your soul, and bad news for your arteries and heart: Rico’s Lechon is now open in Manila.

The Cebu favorite was founded in 1995, and shot to cult fame when former president and now Manila mayor Joseph Estrada ordered a roasted pig from Rico’s. Rico’s was acquired earlier this year by Meat Concepts Corp., the company behind brands Ogawa Traditional Japanese Restaurant, KPub BBQ, Thai BBQ, Oppa Chicken, Modern China, and Tony Roma’s. The first branch in Manila is located in the BGC’s The Fort Strip, close to these outlets by Meat Concepts Corp. Other branches will open soon in Tiendesitas, Glorietta, Ayala Malls Cloverleaf, and UP Town Center.

BusinessWorld attended a preview at the restaurant earlier this week. Friends from Cebu and the Visayas took bites from the sinigang (sour soup) and bam-i (stir-fried noodles) and pronounced it “pwede na” (good enough), while the regular lechon, which of course was the reason why we were there, got the same rating.

The Spicy lechon variant, however, was a revelation. This is the stuff that lechon legends are made of. Shining with fat, covered in chili and spices, it teases and tantalizes the tongue ever so gently, massaging it to get a response, but will slide easily down the throat and land blissfully in your stomach. BusinessWorld found strands of leaves in it, first thought to be lemongrass, but Meat Concepts’ CEO George Pua corrected us and said it was onion leeks. Pressed further to reveal the secret of Rico’s Lechon, he laughed and said, “That’s why it’s called a secret!”

Be forewarned though: bringing in pigs and ingredients from Cebu was quite a hassle, so most of the ingredients are sourced from Luzon. Mr. Pua reiterates that no change would be noticeable in the taste (though Cebu-bred palates might say otherwise). “As long as it’s native, it doesn’t matter,” he said about the pigs, roasted on-site in BGC. “Basically, it’s the marination that will [make] a big difference.”

While Cebu is known for many things, getting Cebu lechon is treated like a quest for many tourists. Mr. Pua talks about the oft-repeated saying that Luzon lechon needs a sauce to give it a boost, while Cebu’s can stand up by itself. “It’s as natural as you can get,” he said. This apparently, says a lot about Cebuanos too. “They’re very proud of Cebu,” he says, which is probably why they wouldn’t need a sauce to cover up the taste of their pigs.

This is the first Filipino concept under the umbrella of Meat Concepts, and Mr. Pua says that the acquisition was natural as they don’t have a Filipino restaurant yet. But the scent of lechon wakes up something inside of Mr. Pua.

“When I was a teenager, we lived in Baclaran. Everytime I opened my window, I saw lechon. I craved for lechon.” — JLG

New establishments in the Fort | July 2018

Rico’s Lechon is coming to Manila